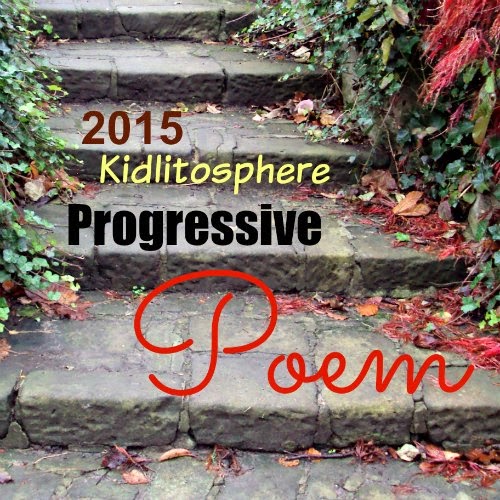 Crafted by thirty different writers (can I call myself a poet?) the Kidlit Progressive Poem is hosted by poet Irene Latham. I started following Irene's writing ever since she first Skyped with my 8th grade students--something which she has done several times over the past few years. Irene has also been incredibly supportive and encouraging to me as a writer...well, as a teacher who writes.

With my lines, I wanted to bring back an earlier piece of the poem--the alluvium and the dark mica. Those textures resonated with me.

She lives without a net, walking along the alluvium of the delta.
Shoes swing over her shoulder, on her bare feet stick jeweled flecks of dark mica.

Hands faster than fish swing at the ends of bare brown arms.
Her hair flows, snows in wild wind as she digs in the indigo varnished handbag,

pulls out her grandmother’s oval cuffed bracelet,  strokes the turquoise stones,
and steps through the curved doorway.

Tripping on her tail she slips hair first down the slide…splash!
She glides past glossy water hyacinth to shimmer with a school of shad,
listens to the ibises roosting in the trees of the cypress swamp
an echo of Grandmother’s words, still fresh in her windswept memory;
“Born from the oyster, expect the pearl. Reach for the rainbow reflection on the smallest dewdrop.”

The surface glistens, a shadow slips above her head, a paddle dips
she reaches, seizes. She’s electric energy and turquoise eyes.

She’s swifter than a dolphin, slipping away,
leaving him only a handful of memories of his own grandmother’s counsel:

“Watch for her. You’ll have but one chance to  determine—to decide.
Garner wisdom from the water and from the pearl of the past.”

In a quicksilver flash, an arc of resolution, he leaps
into the shimmering water
where hidden sentries restrain any pursuit
and the bitter taste of impulse rushes into his lungs.

Her flipper flutters his weathered toes – Pearl’s signal –
Stop struggling. The Sentinels will escort you

He stills, closes his eyes,
takes an uncharacteristic breath of...water!

Released, he swims, chasing the glimmer of the bracelet
Gran gave the daughter who reveled in waves.

Skyping YA authors into the classroom started five years ago for me. We had some really great experiences with Kathi Appelt, Mitali Perkins, Sarah Albee, Gayle Forman, and many others. We tried hashtag chats on Twitter and engaged with Rebecca Stead, Steve Sheinken, and Laini Taylor.

In each case I found myself thinking: I wish all of my students could experience this too.

Over the past year I've attended two SCBWI conferences and one NCTE conference. In each case, writing was celebrated, shared, examined, and discussed. I had the opportunity to rub elbows with and learn from writers such as: Pam Munoz Ryan, David Levithan, Jack Gantos, Nikki Grimes, Kate Messener, Jacqueline Woodson, Georgia Heard, Paul Janeczko, and so on. I sat and listened to educators named Michael Smith, Jeffrey Wilhelm, and Penny Kittle.

And I found myself thinking about how enriched my life has become through these conferences that it all cycled back to one overarching thought nagging at me: I wish all of my students could experience this too.

Along the way, I collaborated with several educators across the country to co-author a piece in English Journal. One of the collaborators, Gary Anderson, had been talking-writing-Tweeting about Writers Week at William Fremd High School in Illinois. The more I read the tweets and watched clips of their videos (they livestream the entire event--incredible) of students, faculty, and professionals celebrating writing I found myself thinking...again...

I wish all of my students could experience this too.

Recently, I proposed the idea to the 8th grade teachers--fortunately, another 8th grade teacher had been thinking of a similar project involving block scheduling. The block schedule would last one week. This would work for us because it would still allow all of the teachers to see their students the same amount of the time as they normally would in any given week. Our special area classes remain undisturbed. Our music lessons and end of the day study hall/extra help period remain status quo.

Our version of the William Fremd High School model would include all of our core subject areas: Math, Social Studies, Geography, Science, and English. Each subject area will be responsible for planning how its time will be used. Science has already speculated that they can try some unique and engaging labs that they never have the time to get to in our traditional schedule. Social Studies has kicked around bringing in guest speakers.

We are in the brainstorming phase at least seven or eight months out from the first proposed dates. We will have even more time if the week gets scheduled after the holidays.

Part of our early conversation has been about an overarching theme--something to build all of our individual blocks around. Some have offered "The Real World" and "Reaching Out" but again, we are just brainstorming. We know we need a theme, a hook, and something to help all of us come together as we plan.

As for English, this is where--in my mind--the writing conference comes into play. I'd love to set up a variety of workshops where students, faculty, and staff share and celebrate writing all week. Another colleague and I will be (soon) reaching out to the professional writing community to see who might be interested in being a part of our 8th grade Conference of Writing.

All of that said, this kind of leap only works with support, collaboration, and enthusiasm. In that, we are lucky to be surrounded by colleagues willing to take a leap and we are fortunate to work in a building and district supportive of creating innovative learning experiences for our students.

A year-long experiment became tangible on Friday. We received the Proof for our 8th grade class novel from CreateSpace. It arrived at about midday so only two of my classes saw it.

Their reactions were charming. Many flipped immediately to the author page to find their name. Some flipped back and forth through the 100 pages to find their sections. One commented it looked so small. Another wanted to know how much we would charge for it.
The most ardent reaction was a boy who joked--maybe he was serious--that he was putting it on his resume: "Yeah, hello, Harvard, I'm a published author...I'll let you know." 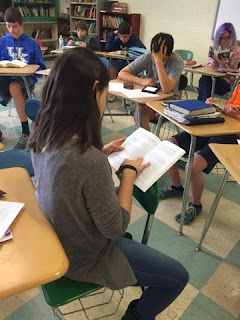 And there were some who didn't react at all--perhaps fatigued by the multiple revisions, editorial suggestions, and months of scrutiny and change.

We started in September by reimagining the Verdi opera Don Carlo as a middle grade (MG) story. Looking only at the triangles of relationships in the opera, we asked ourselves what they would translate to into the world of an 8th grade student.

Why 250 words? Because of the costs involved with professional editing services. Also, 250 words proved to be just enough to challenge the students. Each scene was a moment. By asking for 250 words about a moment, I put my student writers in a position to dig deeper by considering multiple elements: setting, character, action, dialogue, point of view, etc.

Then, class by class, students shared their work in small groups and made the decisions about which was the best point of view for each particular scene.

Once we compiled the scenes chronologically, we then rearranged them so that the book would be divided into six sections--one for each character. As a reader moves through our story, each character tells a slightly different version of the same events.

Our novel went through three rounds of professional editing at CreateSpace. Each time, my students were invited to rewrite the suggested changes irrespective of whether it was their initial contribution or not.

Now, almost 8 months after we began the process, our book is on sale at the CreateSpace marketplace today and will go on sale at Amazon.com somewhere towards the end of next week.

All royalties come back to our middle school's Student Council--benefactor of our project--and will continue to forever. It is our goal to at least generate the initial money Student Council invested in our project so that we can repeat the project for many years to come.

As I introduced the differences between argumentative writing and persuasive writing, one of my creative writing students asked if we could hold Socratic Seminars instead of writing a paper.

While I am not quite ready to punt away the experience of writing an argumentative paper, I thought it might interesting to experiment with Socratic Seminars in lieu of physically handwriting (traditional prewriting activities) in our writers notebooks.

Because we are in week one of a three-week jaunt through state testing, I did not expect anything to be done for homework. Everything was accomplished in class.

Students brainstormed a large list of topics which included: genetic engineering, animal testing, feminism, starting time for school, vaccinations, global warming, homeschooling, gay rights. From the large list, each of my five classes voted on which four they would like to discuss.

Once the topics were decided, we collectively hunted for articles and YouTube videos on our topics. We wanted to find things which not only considered the pros and cons, but also took a position. We wanted to find one common article or video to launch each of our discussions.

I gave students time during class to read the article or to watch the video in preparation for the Socratic Seminar. Notes were ok to bring, but I make it explicitly clear that the intent is not to debate or challenge a person's point of view. We are not trying to win anything. Our purpose to discuss as many facets of a topic as possible. 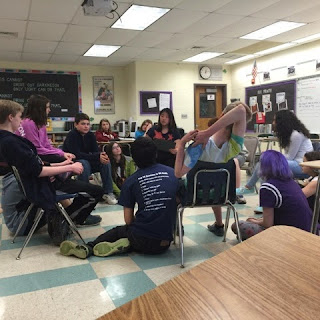 No rubric or score was attached to our process. I truly tried to retain the DNA of judgement-free prewriting. Students were free to talk--one at a time--without raising hands. I asked that they respect one another and learn how to be a part of the conversation without hijacking it.

I initially set six or seven chairs in the inner circle, but as some conversations evolved, students from the outer circle made their own space on the floor between chairs--while maintaining respect and without disrupting the flow of the conversation. It was an unexpected, interesting, development that I let happen. Most classes, I sat well outside the circle and only interjected if conversation needed a boost or if students found difficulty not speaking over one another.

We did this for two weeks. Monday and Wednesdays were preparation days. Tuesday and Thursdays were seminar days.

We will write and revise our argumentative papers Monday through Thursday next week in class.

As always, students will be free to choose their topics. Anything is on the table. Even if they decide not to develop a paper about one of the class Socratic Seminar topics the students practiced many skills needed to develop a compelling argument irrespective of the topic.